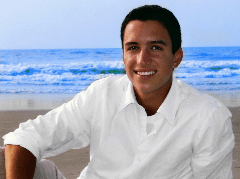 The Livin the Dream Foundation was established in memory of Mark Guensch, and others like him, who struggle to stay strong in a culture where poor decisions, limited options, and peer pressure are the norm.

For Mark, that struggle ended when he was just 19 years old. A Freshman at Liberty University, he had returned home to support his brother in a district basketball playoff game. But after the game, his decision to head to a friend’s home where he spent time partying and drinking with his old high school friends became the first of two decisions that would forever change the lives of his friends and family.

His second decision — a decision that far too many young people make after a high school party — is the decision that ended his life. Mark attempted to drive home and ended up in a car accident that claimed his life.

Mark’s friends, family, and those who knew him, describe him as a likable young man who left a positive impression on those he met. His gentle and encouraging spirit was one that drew people to him. He is remembered for his warmth, his love, his smile, his laughter and his desire to be a bright light to those around him. His friends shared stories that spoke to the little things he did to lift up those around him — from stopping to help a wheelchair-bound student to deliberately reaching out to a girl who was always standing alone.

Mark was a natural leader whose leadership qualities led many to believe that he would achieve whatever he wanted in life.

Join Our Mission to Invest in Youth

Whether you want to give time, talent, or treasure, there are many local young people awaiting your help.